I’m so happy to say that I’m recovering from my three month ordeal with appendicitis. By Dec 15th I should be back to normal and I can’t express how good it feels to not be tired and dizzy from the infection caused by the inflammation and the heavy duty antibiotics. THROUGH ALL OF THIS my new CD “ALL IN” has remained in the top 5 of The RMR Top 50 Blues Charts for twenty weeks and is currently #2! Wednesday Dec 10th I start my tour which will wind through NJ, Cleveland OH, Davenport IA and finally Loves Park IL (a suburb of Illinois). I’m so excited to be doing a double bill with one my guitar hero’s Bobby Messano on this tour! Bobby’s band will be backing me up which will make it extra special!

I’m also pleased to announce that I have received a HOLLOW POINT endorsement courtesy of my pal Scott Quinn. HOLLOW POINT is an amazing intonation system and tone enhancement for Floyd Rose tremolo’s. I will post pictures soon.

In Closing: its great to be back! I can’t wait to see you at one of my shows! 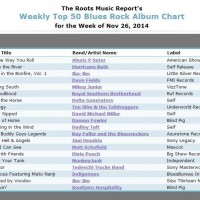 ALL IN has been in the Top 5 on The RMR Top 50 Blues Rock Charts for 19 weeks! Wow, what a fall its been. Despite my appendicitis ALL IN has been TEARING up the charts! My appendix got inflamed Sept 14th and I had to cancel all my shows with the exception of THE LEGENDARY BLUES CRUISE this past October. The doctors treated my appendix with “mind altering” antibiotics. Wouldn’t you know, after I got off the cruise and my appendix got inflamed again! I had my appendectomy Nov 17th and I’ve been rapidly healing. Saturday Nov 29th I was the musical director/co-host of THE BIG CITY BLUES MAGAZINE HAPPY TO HAVE THE BLUES AWARD SHOW. Wow…. WHAT A SHOW! Honorees included: Bettye Lavette, Bob Porter, Carmen Marotta with special guests Laura Rain & The Caesars and Sari Schorr. This next week I’m off to Wilmington NC to do two shows at THE RUSTY NAIL Dec 5th & 6th then next week I’m playing in Cleveland OH Dec 11th at BROTHERS LOUNGE then Friday I’m in Davenport IA at MUDDY WATERS and then HOPE & ANCHOR Saturday Dec 13th in Loves Park IL. I’m so glad i’m better!!!!!

I hope to see you soon at one of my shows!!!

Wow…. I gotta pinch myself! “ALL IN” has been in the RMR Top 5 Blues Charts Since Aug 25th! Thanks everyone for your support and thanks to my radio PR person Rick Lusher! If you haven’t picked up a copy yet click here

I haven’t been able to post for a few weeks because I suffered a brief bout of appendicitis and then I went on The Legendary Blues Cruise ℅ Big City Blues Magazine (I am the NYC correspondent). I don’t want to talk about the appendicitis but the cruise, WOW! I got to meet so many new people from Canada and the west coast and the shows we had at The Big City Blues Magazine booth were unmatched. My cabin mate and fellow New Yorker Guy Powell played pots and pans and a great big garbage can. I grabbed people who were walking by with instruments and we had a real juke joint style throw down right there on the boat! I could keep writing about how amazing it was but let me end by saying that Robert Whitall Jr and Shirley “Sugar” Owens, the publishers worked relentlessly, running the silent auction and connecting with new subscribers. I wanna send a big thanks to them.

I’m off to Scandinavia again with a show in Åros Norway and The Hallingrock Festival in Gol Norway. Then I’m off to London to produce singer song writing sensation Stephen North. Then my pal JT Lauritsen will be in NY for three shows Nov 6th-8th.

“ALL IN” remains in the Top 5 of The RMR Top 50 Blues-Rock charts the week of Sept 8th! I want to thank everyone for their continued support! Being an independent artist I couldn’t do what I’m doing without your love! ….Thank you!

YOU CAN REQUEST “ALL IN” TO BE PLAYED:
Sirius/XM Radio:
bbkingsbluesville@siriusxm.com

CHECK OUT THE NEW REVIEWS:
http://www.davefields.com/reviews.

You can purchase a copy here: http://www.cdbaby.com/davefields4 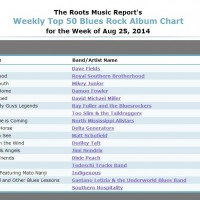 My new CD “ALL IN” tops The RMR Top 50 Blues Rock Charts at #1 for the week of August 25th 2014. After being #5 the previous 3 weeks and #4 the previous week this is a great jump! I’m so thankful for all the support the DJ’s have given me and most of all Rick Lusher for always “shooting from the hip” with me and doing a fantastic job. I’m so excited I’ve run out of words…..!!!!!!

ALSO…. Dave’s new CD “ALL IN” is number 4 on The RMR Top 50 Blues Rock Charts! Dave, ” My PR agent Rick Lusher has been working away on getting ‘ALL IN’ out there to all the radio stations. Its so cool to see the benefits of his work! I wanna thank all the radio stations for their support!!!” To order “ALL IN” click here

Wow!!!! I’m so psyched! I’ve been away on tour in Norway and I get back and “ALL IN” is number 5 on the RMR Blues Charts! WOOHOO! 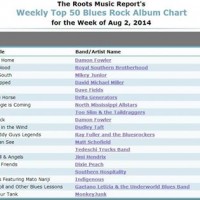 I try to post something every week but the past two weeks were just a whirlwind of amazing experiences. First of all my wife Judy and I flew to Oslo July 23rd. It was her first time to Norway and I was so excited to share the amazingness and enchantment of Norway. Surprisingly the weather was HOT! It was in the 80’s (30 c) and being so far north the sun was a little overbearing. We spent two days in Oslo and then we headed to the west coast and more specifically Veiholmen Norway for The Smøla Blues Klubbs festival. Wow, being there reminded me of New England only a lot less crowded and utterly beautiful. The sun never set, it stayed dusk from about 11:30pm until 3:30 then the sun would slowly sneak out until it was REALLy out around 5am. The crowd was awesome and I got to see many of my Norwegian friends like Nina Hansen, Syver Srøbka, Rolf Johannessen, Ellen Pederson….. TOO MANY TO LIST!!! My Norwegian band: Kåre Amundsen and Bjørn Hagset KICKED ASS they played with BIG BALLS! LOL!

After Smøla we did an afternoon show in Krstiansund Norway at this lovely cafe called GAANVERKEN then we played at the legendary Kristiansund rock bar FASTING KJELLEREN. The place was packed and it was awesome!

We had the next 6 days off so Judy and I headed to one of my favorite Norwegian places: Molde Norway. Molde is situated on the lovely Fannet Fjord which is flanked by 200+ mountain peaks. Anyone who’s seen it will agree with me, its spellbinding! We connected with Kåre’s lovely wife and my Norwegian aries sister Ragnhild and spent morning’s eating Svela (a west coast Norwegian delicacy somewhat like pancakes but with sugar and butter) and sipping tea while viewing the fjord. Judy and I decided to visit the neighboring city of Ålesund which is a lovely almost Austrian looking town and hour and a half east of Molde. After taking the ferry to Vestnes and through the countryside we arrived in Ålesund and spent the day exploring. The highlight of our excursion was taking the Hurtigruten boat back through the fjords to Molde, a three hour trip, which was mesmerizing! Wow, if you ever go to Norway YOU HAVE TO DO THAT! When we arrived back at our hotel, The Molde Fjord Steurer (which I HIGHLY recommend) we both were in agreement, we were in love with Molde.

Our next stop was back to Oslo where went to Vigeland (an amazing sculpture park and a national treasure), The City Hal where they give out the Nobel Peace Prize and The Opera (which is the most beautiful Opera house I have ever seen). The Opera house is aped like a glacier…. OMG!!!!

My last show(s) was The Notodden Blues Festival and I was slated to perform three shows on the boat cruise then a late show at the legendary Notodden music venue BELLMAN PUB. Before I performed I was asked by The Norwegian Blues Union to be a judge at their blues challenge. It was so hard to pick a winner, the bands were all great…!

The boat cruise was out of this world, with patrons sitting right in front of me. We were so lucky to get the greatest “handler” the lovely Anita Haugen who took such great care of us. It was supposed to rain but the blues gods prevailed and the weather was perfect. I don’t want to forget, bass wiz Trond Hansen was with us and he was truly wonderful. My wife Judy fell in love with him and I though he played with big balls as well (…did I just say big ball again??? OMG! Am I allowed to do that??!!!) WE SOLD 84 CD’S! That’s a new Dave Fields record!

The evening show at BELLMAN PUB was equally as amazing. It was steamy, rockin’ and I didn’t want to stop!!!! What an honor to be included! I want to thank Jostein Forsberg who runs Notodden Blues so much! Need less to say I was “toast” the next day after doing four shows in one day but it was worth it!

After Notodden we said our goodbyes to Kåre Amundsen and his wife Ragnihld and Trond Hansen and we headed back to Oslo where we stayed at the Comfort Hotel Børskparken which I also highly recommend. We met with guitarist/DJ Stig-Ole Skaldabø and also sat in at STOP PRESSEN. Most importantly we met with my Bro AND Notodden Blues Prize Winner JT Lauritsen and his lovely wife Marion. We had a sumptuous dinner and chatted the evening away. The next day we were so sad to leave. Norway captured both Judy and my heart. Its a land of the nicest people, the cleanest water and air and, of course the blues! I will be back in October and I hope to have some exciting news soon!!!!!

Thanks for reading! I hope to see you soon at one of my shows!!!!! 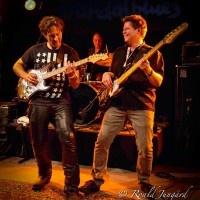 The Dave Fields European Band takes the stage in Norway this past weekend with shows in Smøla and Kristiansund! Also Dave’s new CD “All In” debuts at #6 on The NY Blues Charts AND has been getting RAVE reviews. Stayed tuned for more exciting news!