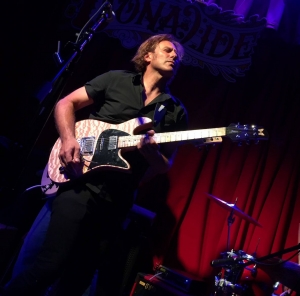 It’s been a great honor to be one of the first people here in the NYC area to get a Fodera Guitar endorsement. I’ve known the folks at Fodera for years having played in many bands with legendary bassist and Fodera cofounder Joey Lauricella. For those of you who haven’t met Vinny Fodera he’s the most beautiful man you’d ever want to meet and the most amazing master luthier in the NYC and beyond area. Jason DeSalvo, the other partner is a true gentleman and also my pal BUT…. this article is not about how amazing the owners of Fodera are or about how much I love them. It’s about the guitars they create and believe me, I’m a tough critic! I’ve assembled the three of my previous guitars and I know what goes into building a guitar. That’s why, as much as I was thrilled when I was offered the Fodera Guitar endorsement, I knew when I got the guitar I would have to take some hard looks at it.

Let me start off by saying, I’ve had my Fodera Emperor Classic about a month now. When we were discussing the build of the guitar, we all agreed that we weren’t going to go crazy customizing it. I did have a few requests however: that it would remain around 8lbs, that the neck would be a 60’s thin C style profile. I also asked for Humbucker-Single-Humbucker pickup configuration. I wanted spectacular quilted maple on chambered mahogany. The only thing that was an extra was the 24db boost pot. We mutually decided to put in Lindy Fralin pickups. We started out with two Pure PAF’s and a split blade for the single coil. Other than that, it’s a Fodera Emperor Classic like you would buy online or in the store.

It took some months to build, like any handmade guitar. I have to tell you though… when I first laid eyes on it, it was love at first sight…. The craftmanship, the attention to detail, the sheer beauty of it is truly remarkable…. Like nothing I’ve ever seen or held in my hands before. This guitar rings and sings like a beautiful drop dead gorgeous diva or it screams like a big haired rocker or croons like an old jazzer. I was awestruck by the evenness of every note in every register and especially the high notes which sang out as clear as a bell and had beautiful sustain. I couldn’t stop smiling after playing it!!!! LOL!!!

A couple of observations: When I first got my guitar, it was so new it had a faint smell of fresh paint. Joey and Vinny both cautioned me that the neck would need some time to settle in. I like very low action with D’Addario EXL 120 strings so I’m very sensitive to the slightest movement on the neck. One of my first shows with the guitar were in the summer where it was very hot and high humidity. The neck moved around for about a week or so but as Joey Lauricella put it, “you have to bend it to your will”! I love that! And that’s exactly what I did. I broke it in and WOW….!! It came even more alive! Will DeYoung, one of the gang at Fodera, was so amazing in helping me fine tune the sound by doing little tweaks to the frets and changing the neck pickup to a Sunbucker Blues. Also, and this is one of the incredible things about Fodera, Vinny recarved the neck for me just as a tweak. WOW… that’s one thing you could never get from a big guitar manufacturer: service, love, attention to detail and CARE!

I soon realized that the guitars that I had been playing were like toys AND, this is really huge, this hit me like a ton of bricks… why would someone spend the same amount of money on a guitar off the rack when they could get a handmade guitar from Fodera that would blow away anything they could buy from one of the big name guitar companies?!!!!

I could go on and on about my guitar and Fodera. Let me close by saying I wish you readers could play it! That says it all! Come to one of my shows and you can witness it in person or hear it on my new CD that should be out in spring of 2019, “Force of Will”.

Hope to see you soon!

(For more about Fodera Guitars:)
www.foderaguitars.com